In this article, we evaluate the performance of Hive-LLAP in HDP 3.1.4, the latest release of HDP, and Hive 3.1.2 on MR3 0.10 using both sequential and concurrency tests. As MR3 supports Hive 4 as well, we include Hive 4.0.0-SNAPSHOT on MR3 0.10 in the evaluation. The objective of the experiment is to demonstrate that in comparison with Hive-LLAP in the latest release of HDP, Hive on MR3 continues to remain competitive in its performance. As in the previous experiment, we use the TPC-DS benchmark.

We run the experiment in a 20-node cluster, called Indigo, consisting of 1 master and 19 slaves. All the machines in the Indigo cluster run HDP 3.1.4 and share the following properties:

The memory size for Yarn on a slave node is 84GB. The scale factors for the TPC-DS benchmark are 3TB and 10TB. We generate both datasets in ORC.

We use a variant of the TPC-DS benchmark introduced in our previous article which replaces an existing LIMIT clause with a new SELECT clause so that different results from the same query translate to different numbers of rows. The reader can find the modified TPC-DS queries in the GitHub repository.

In a sequential test, we submit 99 queries from the TPC-DS benchmark and use a scale factor of 10TB. We measure the running time of each query and the number of rows in the result. If the result contains a single row, we compute the sum of all numerical values in it.

We suspect that both Hive-LLAP and Hive 4 incorporate a certain commit that somehow affects the result of query 70.

We summarize running times as follows:

In order to gain a sense of which system answers queries fast, we rank the three systems according to the running time for each individual query. The system that completes executing a query the fastest is assigned the highest place (1st) for the query under consideration. In this way, we can evaluate the three systems more accurately from the perspective of end users, not of system administrators. 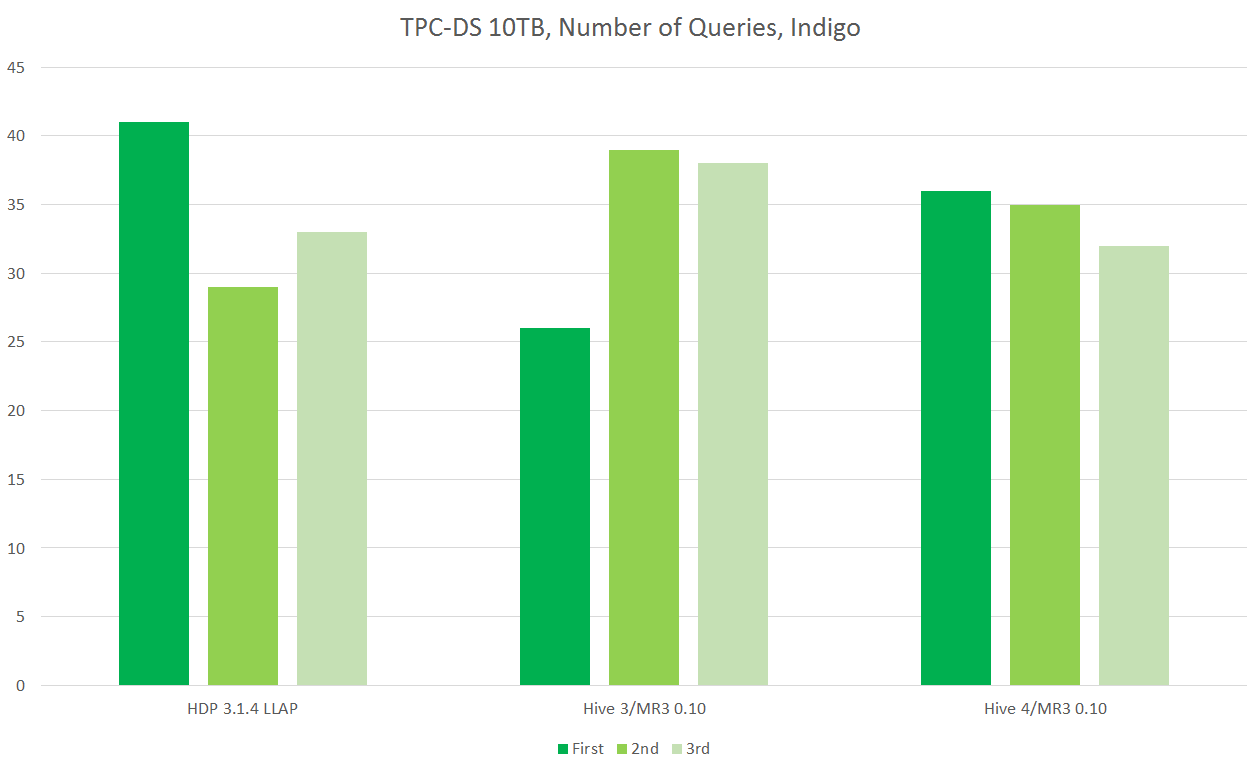 We observe that none of the systems finishes all queries consistently faster than the other two. Similarly to the previous analysis, however, Hive 3.1.2 on MR3 0.10 runs slightly slower than Hive-LLAP and Hive 4.0.0-SNAPSHOT on MR3 0.10 on the whole.

In our experiment, we choose a concurrency level from 1 to 16 and start as many Beeline clients (from 1 client up to 16 clients), each of which submits 17 queries, query 25 to query 40, from the TPC-DS benchmark. In order to better simulate a realistic environment, each Beeline client submits these 17 queries in a unique sequence. For each run, we measure the longest running time of all the clients. Since the cluster remains busy until the last client completes the execution of all its queries, the longest running time can be thought of as the cost of executing queries for all the clients.

The following table and graph show the results of concurrency tests with a scale factor of 3TB. We also derive from the running time a new metric, called concurrency factor, quantifying the overall efficiency in managing concurrent queries. 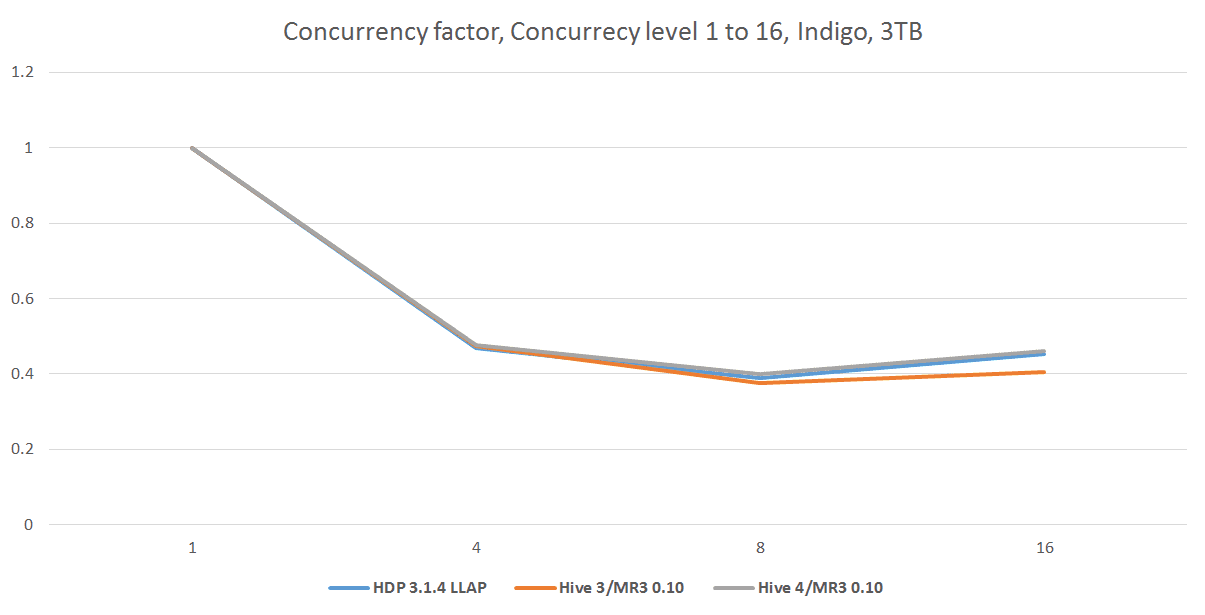 From the experiment, we observe that the three systems are comparable in performance for concurrency tests. For the concurrency level of 16, Hive 3.1.2 on MR3 0.10 runs slightly faster than the other two systems. The fact that the concurrency factor stays below 0.5 implies that on the dataset of 3TB, running the 17 queries sequentially consumes approximately half the resources of the cluster. This is no longer the case when we use a scale factor of 10TB.

The following table and graphs show the results of concurrency tests with a scale factor of 10TB. 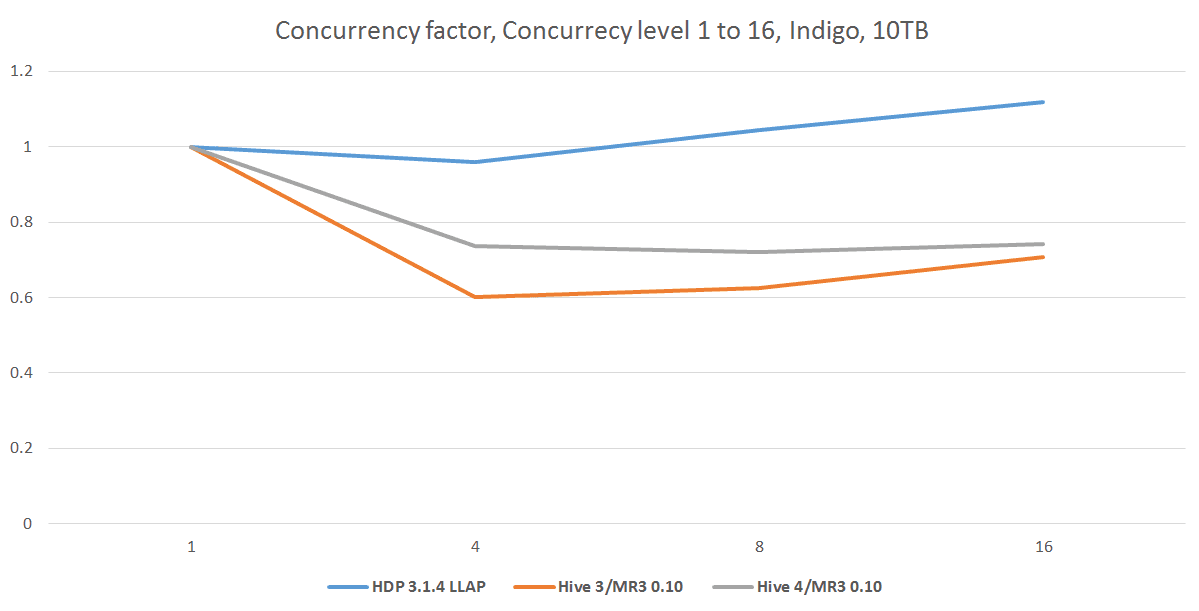 We observe that from the concurrency level of 4, Hive on MR3 0.10 runs noticeably faster than Hive-LLAP, despite the fact that Hive-LLAP runs faster when all queries are executed sequentially. This suggests that Hive-LLAP incurs a large overhead of executing concurrent queries, as evidenced by its concurrency factor which stays around 1.0. (Recall that a concurrency factor of 1.0 is exhibited by a system that is executing queries only sequentially.) Thus we conclude that for a dataset too large for the resources of the cluster (e.g., TPC-DS dataset of 10TB on Indigo), Hive on MR3 makes better use of resources than Hive-LLAP when executing concurrent queries.

In comparison with Hive-LLAP, Hive on MR3 has its own strengths (such as low concurrency factors), but it runs slightly slower than Hive-LLAP when executing a single query with the same query plan. This is mostly because in the current implementation, Hive on MR3 uses the Tez runtime which is designed on the assumption that only a single Task (equivalent to an executor in Hive-LLAP) runs at a time inside the Java process. We are currently optimizing the Tez runtime for the typical case in which multiple Tasks run concurrently inside the Java process.