With the impending release of MR3 0.10, we make a comparison between Presto and Hive on MR3 using both sequential tests and concurrency tests. We use Presto 317, the latest release by the Presto Software Foundation, and Hive 3.1.1 running on MR3 0.10 (snapshot). As in the previous experiment, we use the TPC-DS benchmark.

We run the experiment in the same cluster from the previous article: a 13-node cluster, called Blue, consisting of 1 master and 12 slaves. All the machines in the Blue cluster run Cloudera CDH 5.15.2 and share the following properties:

The scale factor for the TPC-DS benchmark is 10TB. For both Presto and Hive on MR3, we generate the dataset in ORC.

We use a variant of the TPC-DS benchmark introduced in the previous article which replaces an existing LIMIT clause with a new SELECT clause so that different results from the same query translate to different numbers of rows. For Presto which uses slightly different SQL syntax, we use another set of queries which are equivalent to the set for Hive on MR3 down to the level of constants. The reader can find the two sets of modified TPC-DS queries in the GitHub repository.

For Presto, we use 194GB for JVM -Xmx and the following configuration (which we have chosen after performance tuning):

For Hive on MR3, we allocate 90% of the cluster resource to Yarn. We use the configuration included in the MR3 release (hive3/hive-site.xml, mr3/mr3-site.xml, tez/tez-site.xml under conf/tpcds/). A ContainerWorker uses 36GB of memory, with up to three tasks concurrently running in each ContainerWorker.

In a sequential test, we submit 99 queries from the TPC-DS benchmark. If a query fails, we measure the time to failure and move on to the next query. We measure the running time of each query and the number of rows in the result. If the result contains a single row, we compute the sum of all numerical values in it. We have manually verified that Hive on MR3 and Presto agree on the result for every query that returns a single row.

We summarize the result of running Presto and Hive on MR3 as follows:

For the set of 97 queries that both Presto and Hive on MR3 successfully finish:

For most queries, the two systems return the same result and are thus sound with an extremely high probability. For query 21, Hive on MR3 reports about 10 percent fewer rows than Presto (which is the same result reported in the previous article). For query 68, the two systems report completely different results: Hive on MR3 returns no rows while Presto returns 21137346 rows. Hence at least one of Presto and Hive on MR3 is unsound with respect to query 68. 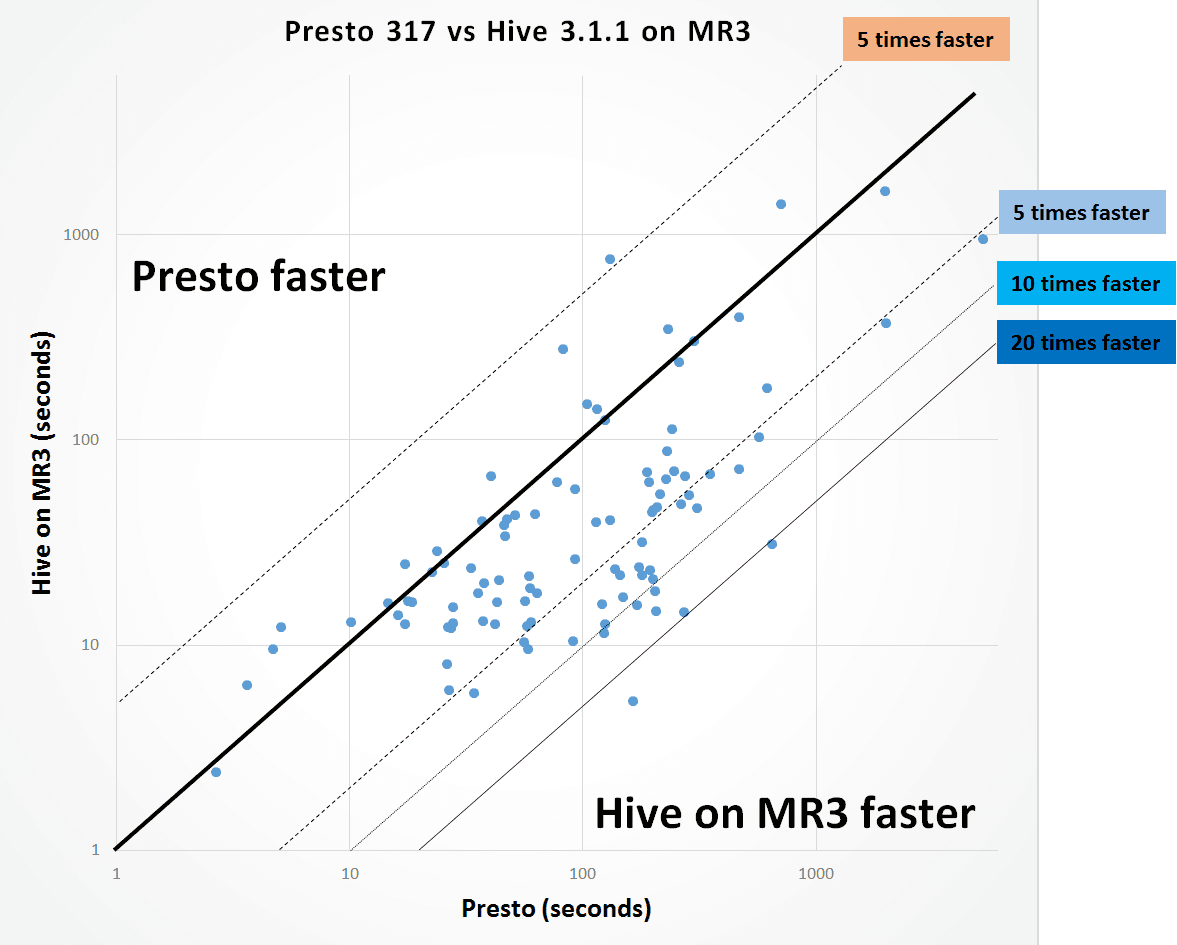 In our experiment, we choose a concurrency level from 8 to 16 and start as many Beeline or Presto clients (from 8 clients up to 16 clients), each of which submits 17 queries, query 25 to query 40, from the TPC-DS benchmark. In order to better simulate a realistic environment, each Beeline or Presto client submits these 17 queries in a unique sequence. For each run, we measure the longest running time of all the clients. Since the cluster remains busy until the last client completes the execution of all its queries, the longest running time can be thought of as the cost of executing queries for all the clients. 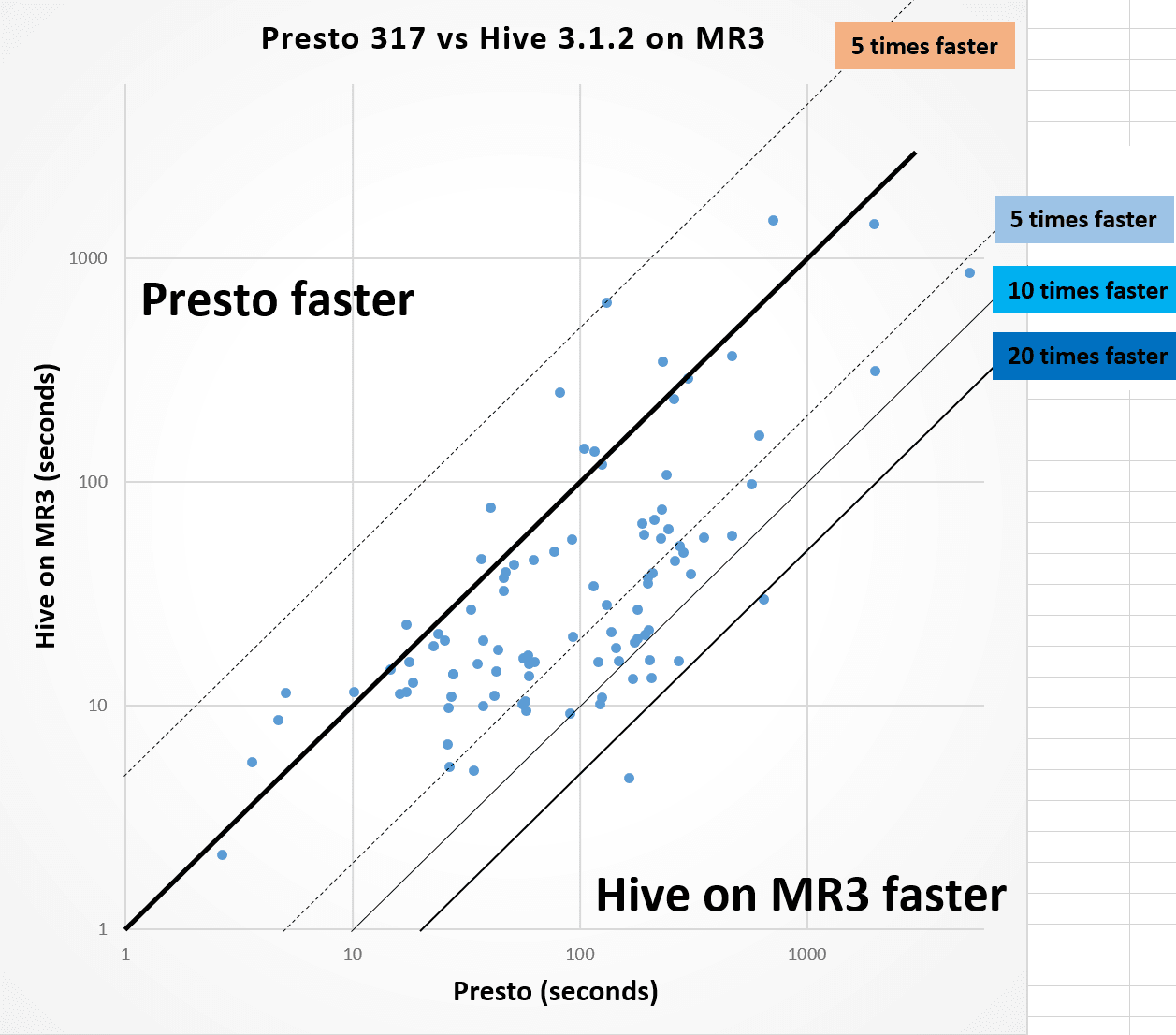