Performance Evaluation of Impala, Presto, and Hive on MR3

In our previous article, we use the TPC-DS benchmark to compare the performance of five SQL-on-Hadoop systems: Hive-LLAP, Presto, SparkSQL, Hive on Tez, and Hive on MR3. As it uses both sequential tests and concurrency tests across three separate clusters, we believe that the performance evaluation is thorough and comprehensive enough to closely reflect the current state in the SQL-on-Hadoop landscape. Our key findings are:

The previous performance evaluation, however, is incomplete in that it is missing a key player in the SQL-on-Hadoop landscape – Impala.

With the release of MR3 0.6, we use the TPC-DS benchmark to make a head-to-head comparison between Impala and Hive on MR3 in the main playground for Impala, namely Cloudera CDH. As Impala achieves its best performance only when plenty of memory is available on every node, we set up a new cluster in which each node has 256GB of memory (twice larger than the minimum recommended memory). In addition, we include the latest version of Presto in the comparison.

We run the experiment in a 13-node cluster, called Blue, consisting of 1 master and 12 slaves. All the machines in the Blue cluster run Cloudera CDH 5.15.2 and share the following properties:

Instead of using TPC-DS queries tailored to individual systems, we use the same set of unmodified TPC-DS queries. For Presto which uses slightly different SQL syntax, we use another set of queries which are equivalent to the set for Impala and Hive on MR3 down to the level of constants.

For Impala, we use the default configuration set by CDH, and allocate 90% of the cluster resource.

For Presto, we use 194GB for JVM -Xmx and the following configuration (which we have chosen after performance tuning):

For Hive on MR3, we allocate 90% of the cluster resource to Yarn. We use the configuration included in the MR3 release 0.6 (hive5/hive-site.xml, mr3/mr3-site.xml, tez/tez-site.xml under conf/tpcds/). A ContainerWorker uses 36GB of memory, with up to three tasks concurrently running in each ContainerWorker.

In a sequential test, we submit 99 queries from the TPC-DS benchmark. If a query fails, we measure the time to failure and move on to the next query. We measure the running time of each query, and also count the number of queries that successfully return answers.

Result 1. Impala vs Hive on MR3

We summarize the result of running Impala and Hive on MR3 as follows:

For the set of 59 queries that both Impala and Hive on MR3 successfully finish: 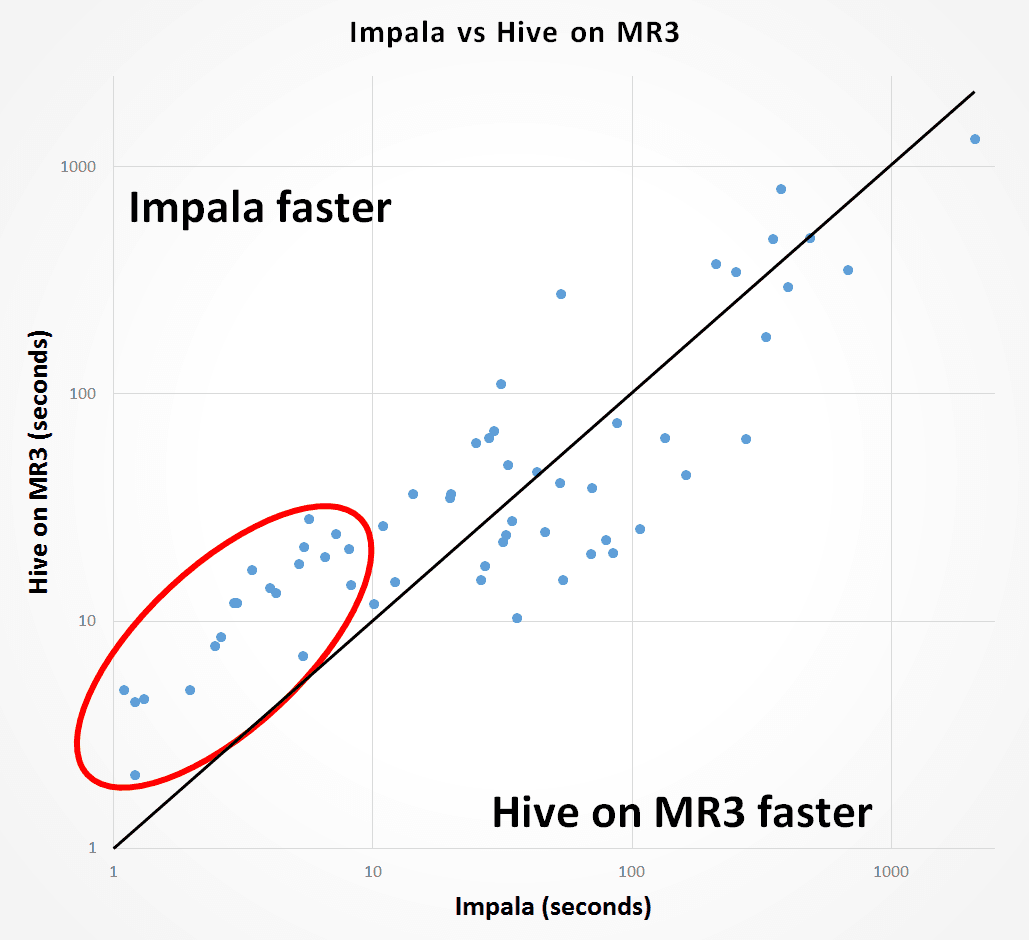 Result 2. Presto vs Hive on MR3

We summarize the result of running Presto and Hive on MR3 as follows:

For the set of 95 queries that both Presto and Hive on MR3 successfully finish: 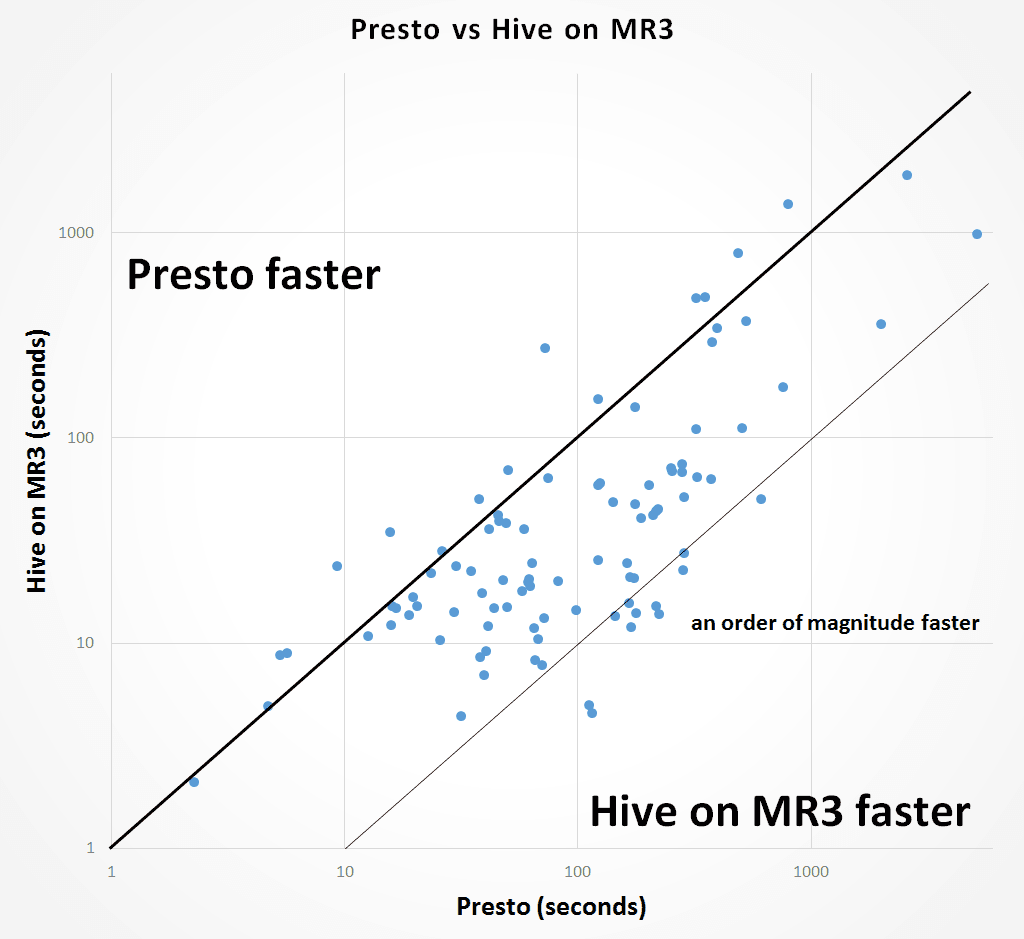 For the experiment, we conclude as follows:

Impala was first announced by Cloudera as a SQL-on-Hadoop system in October 2012, and Presto was conceived at Facebook as a replacement of Hive in 2012. At the time of their inception, Hive was generally regarded as the de facto standard for running SQL queries on Hadoop, but was also notorious for its sluggish speed which was due to the use of MapReduce as its execution engine. Just a few years later, it appeared like Impala and Presto literally took over the Hive world (at least with respect to speed). SparkSQL was also quick to jump on the bandwagon by virtue of its so-called in-memory processing which stood in stark contrast to disk-based processing of MapReduce.

Fast forward to 2019, and we see that Hive is now the strongest player in the SQL-on-Hadoop landscape in all aspects – speed, stability, maturity – while it continues to be regarded as the de facto standard for running SQL queries on Hadoop. Moreover its Metastore has evolved to the point of being almost indispensable to every SQL-on-Hadoop system. After all, there should be a good reason why Hive stands much higher than Impala, Presto, and SparkSQL in the popular database ranking.

Because of the dizzying speed of technological change, from Big Data to Cloud Computing, it is hard to predict the future of Hive accurately. (Who would have thought back in 2012 that the year 2019 would see Hive running much faster than Presto, which was invented for the very purpose of overcoming the slow speed of Hive by the very company that invented Hive?) We see, however, an irresistible trend that Hive cannot ignore in the upcoming years: gravitation toward containers and Kubernetes in cloud computing. In fact, Hive-LLAP running on Kubernetes is apparently already under development at Hortonworks (now part of Cloudera). In the case of Hive on MR3, it already runs on Kubernetes. We believe that Hive on MR3 lends itself much better to Kubernetes than Hive-LLAP because its architectural principle is to utilize ephemeral containers whereas the execution of Hive-LLAP revolves around persistent daemons. From the next release of MR3, we will focus on incorporating new features particularly useful for Kubernetes and cloud computing.