We often ask questions on the performance of SQL-on-Hadoop systems:

While interesting in their own right, these questions are particularly relevant to industrial practitioners who want to adopt the most appropriate technology to meet their need.

In this article, we report our experimental results to answer some of those questions regarding SQL-on-Hadoop systems. The results are by no means definitive, but should shed light on where each system lies and in which direction it is moving in the dynamic landscape of SQL-on-Hadoop. In particular, the results may contradict some common beliefs on Hive, Presto, and SparkSQL.

Clusters to use in the experiment

We run the experiment in two different clusters: Red and Gold. All the machines in both clusters share the following properties:

We compare six different SQL-on-Hadoop systems that are available on Hadoop 2.7. Note that Hive 3.0.0 is officially supported only on Hadoop 3, so we have modified the source code so as to run it on Hadoop 2.7.

For Hive-LLAP, we use the default configuration set by Ambari. An LLAP daemon uses 160GB on the Red cluster and 76GB on the Gold cluster. An ApplicationMaster uses 4GB on both clusters.

For Presto, we use the following configuration (which we have chosen after performance tuning):

A Presto worker uses 144GB on the Red cluster and 72GB on the Gold cluster (for JVM -Xmx).

For each run, we submit 99 queries from the TPC-DS benchmark with a Beeline connection or a Presto client. Since query 14, 23, and 39 proceed in two stages, we execute a total of 103 queries. If a query fails, we measure the time to failure and move on to the next query. We set a timeout of 7200 seconds for Hive 2.3.3 on MR3.

We count the number of queries that successfully return answers:

Here is the summary:

We measure the total running time of all queries, whether successful or not:

Unfortunately it is hard to make a fair comparison from this result because not all the systems are consistent in the set of completed queries. For example, Hive 2.3.3 on MR3 takes over 21,000 seconds on the Red cluster because query 16 and 94 fail with a timeout after 7200 seconds, thus accounting for two thirds of the total running time. Nevertheless we can make a few interesting observations:

In order to gain a sense of which system answers queries fast, we rank all the systems according to the running time for each individual query. For example, a system that completes executing a query the fastest is assigned the highest place (1st) for the query under consideration. If a system does not compile or fails to complete executing a query, it is assigned the lowest place (6th) for the query under consideration. In this way, we can evaluate the six systems more accurately from the perspective of end users, not of system administrators.

Here is the result from the Red cluster: 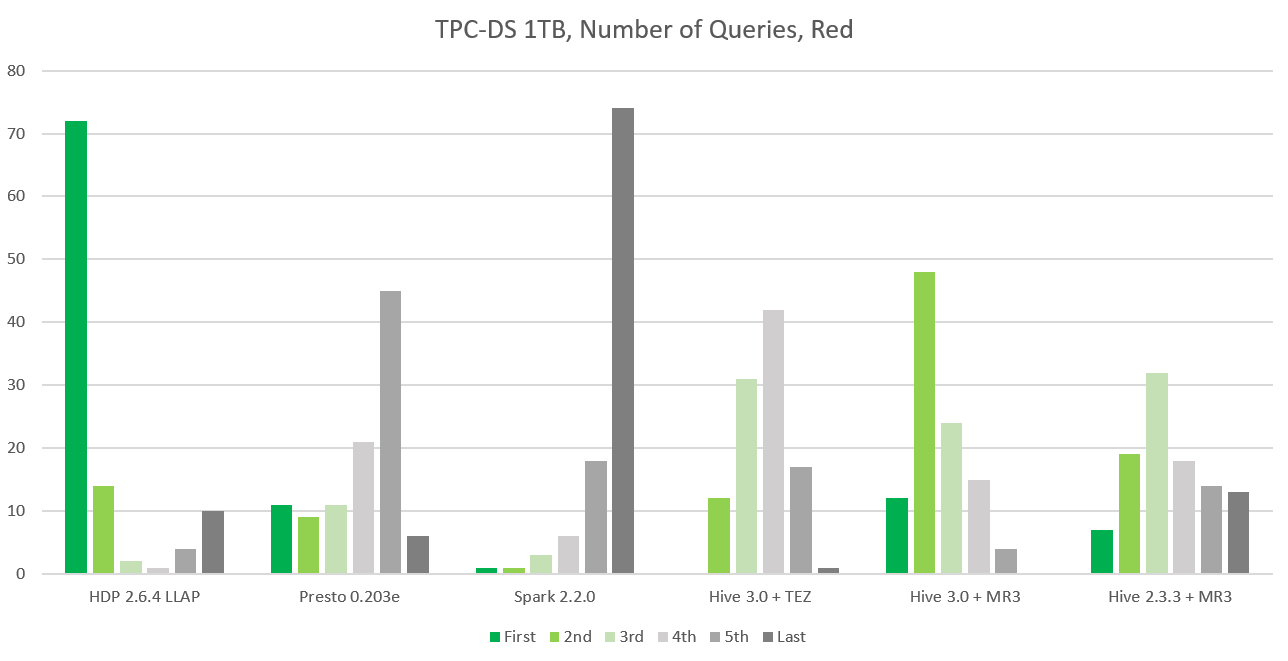 From the Gold cluster, a noticeable change emerges: 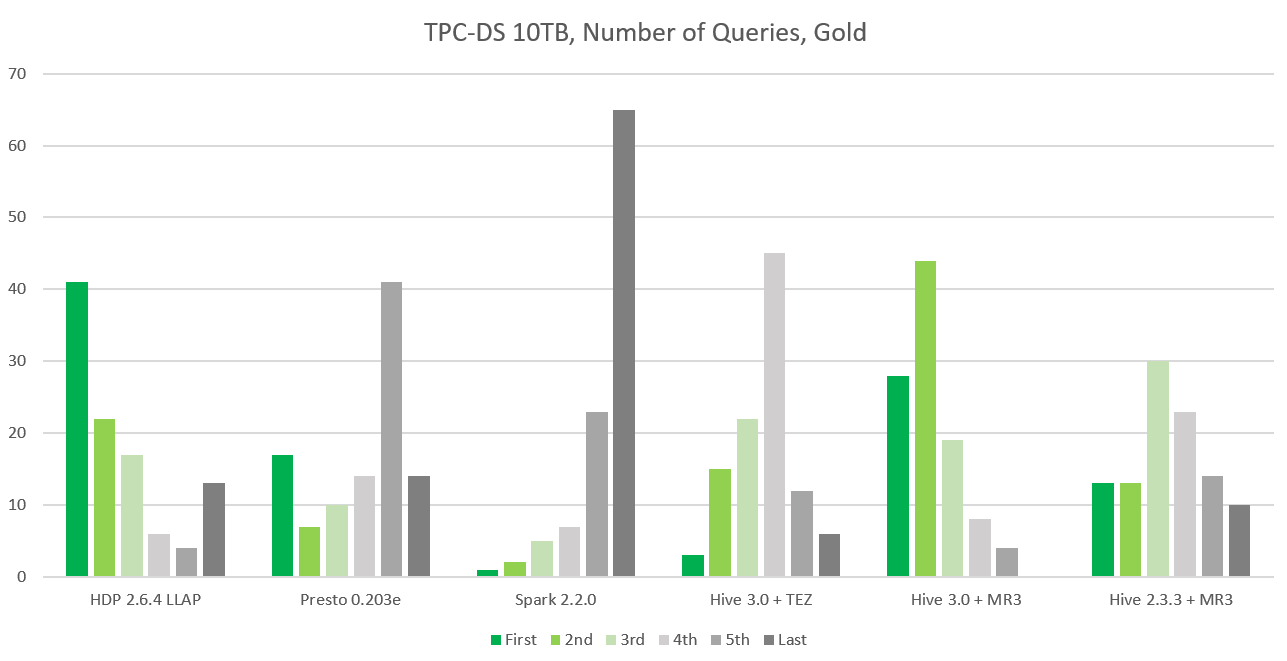 From our analysis above, we see that those systems based on Hive are indeed strong competitors in the SQL-on-Hadoop landscape, not only for their stability and versatility but now also for their speed. We also see that MR3 is a new execution engine for Hive that competes well with LLAP, by virtue of its comparable speed and such additional features as elastic allocation of cluster resources, full implementation of impersonation, easy deployment, and so on. In a follow-up article, we will evaluate SQL-on-Hadoop systems in a concurrent execution setting.