We run the experiment in the same clusters as before: Red and Gold. All the machines in both clusters are identical:

The Red cluster is configured as follows:

The Gold cluster is configured as follows:

For each combination of Hive-MR3 and Tez runtime, we try MR3 and Tez as the execution engine (by setting hive.execution.engine to mr3 or tez in hive-site.xml). For each run, we simultaneously start 16 Beeline connections, each of which repeats a total of 10 times a sequence consisting of query 18, query 19, and query 20 from the TPC-DS benchmark (and thus executes 30 instances of the three queries). We reuse configuration settings in the directory conf/tpcds of the Hive-MR3 release for all runs, with the following exceptions:

Since we are interested only in the relative performance of MR3 with respect to Tez, our experiment does not enable various optimization features found in Hive 2.x.

The following chart shows the longest running time (in seconds) for each run in the Red cluster:

The following chart shows the longest running time (in seconds) for each run in the Gold cluster:

The following table shows the reduction in the longest running time (in percentage) when switching from Tez to MR3:

We observe that across all the combinations of Hive-MR3 and Tez runtime in both clusters, Hive-MR3 achieves a significant reduction in the cost of executing queries. For example, Hive-MR3 based on Hive 1.2.2 reduces the longest running time by 48.50% (from 10187.269 seconds to 5246.414 seconds) in the Gold cluster, thereby almost doubling the throughput. Hence MR3 has a clear advantage over Tez in multi-user environments as well.

To explain how Hive-MR3 makes a much better utilization of computing resources than Hive-on-Tez, see the following heat map of containers over time when running the same sequence of queries 18 to 20 in a single session: 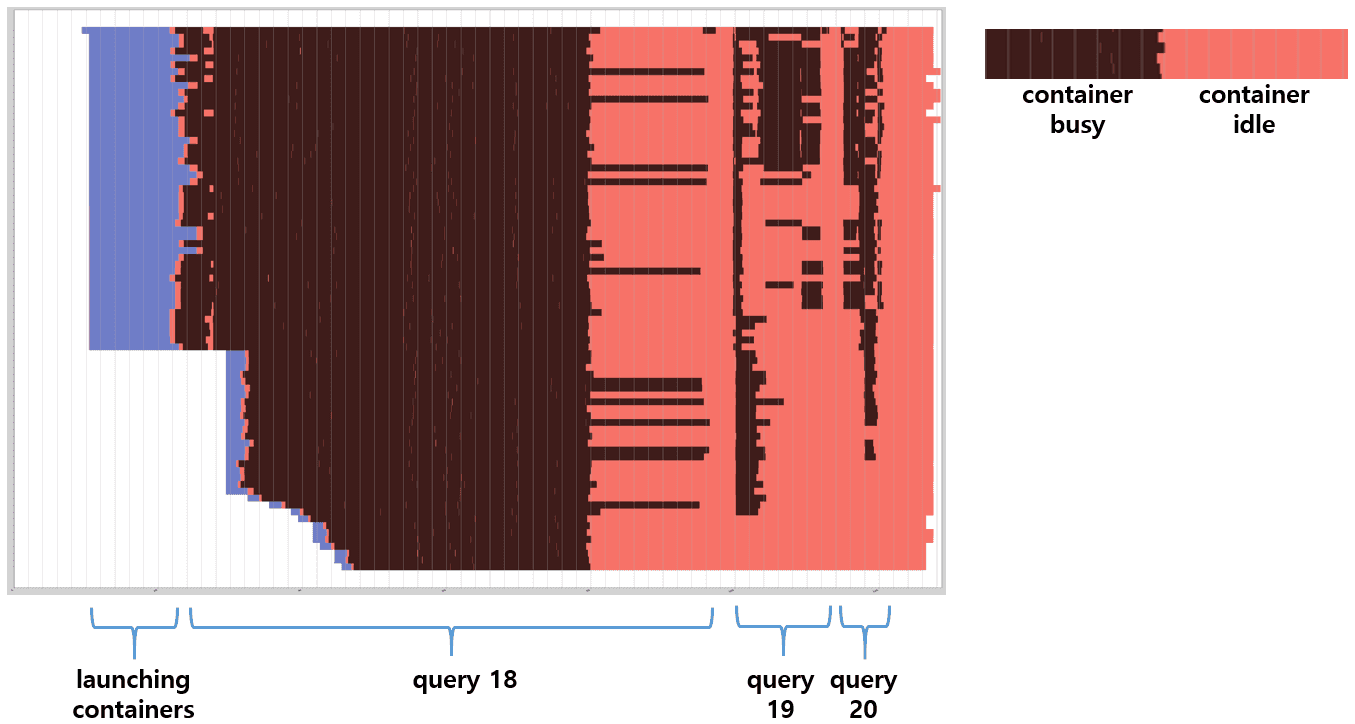 Because of the difference in the complexity of DAGs, the session allocates many containers for query 18 in the beginning, but the majority of these containers stay almost idle once query 18 reaches its last stage. In the case of Hive-on-Tez, such idle containers cannot be reassigned to another concurrent session because of the limitation of Tez DAGAppMasters, each of which maintains its own island of containers. In contrast, Hive-MR3 can immediately reassign such containers to serve other queries from concurrent sessions if all sessions share a common DAGAppMaster, or if HiveServer2 runs in shared session mode. For this reason, MR3 ContainerWorkers in our experiment are almost always busy serving different queries from different sessions.

Our experiment indeed confirms these properties of Hive-MR3 and Hive-on-Tez. The following graph shows the progress of every Beeline connection in the Red cluster: 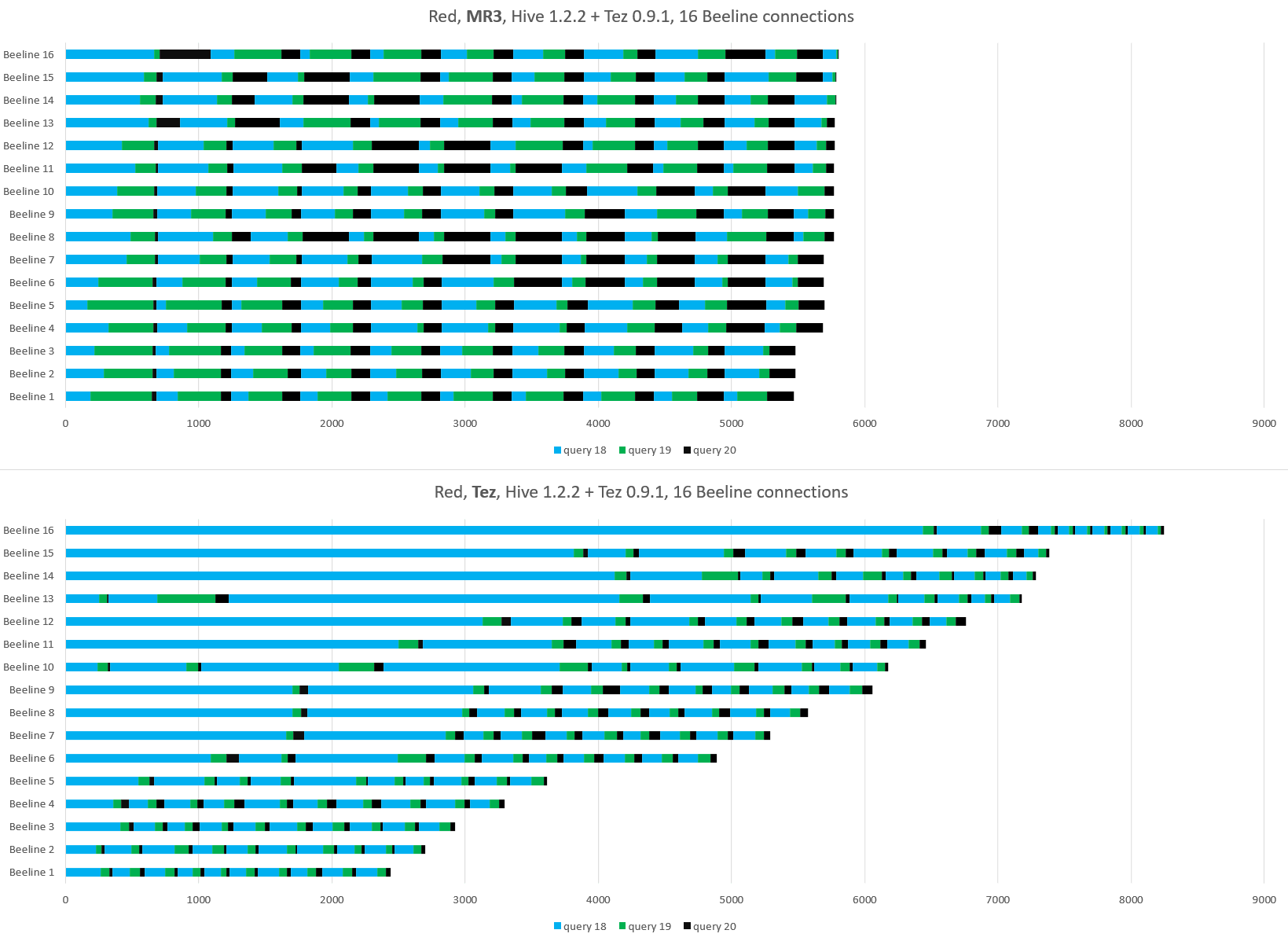 We observe the same behavior of Hive-MR3 and Hive-on-Tez from the Gold cluster: 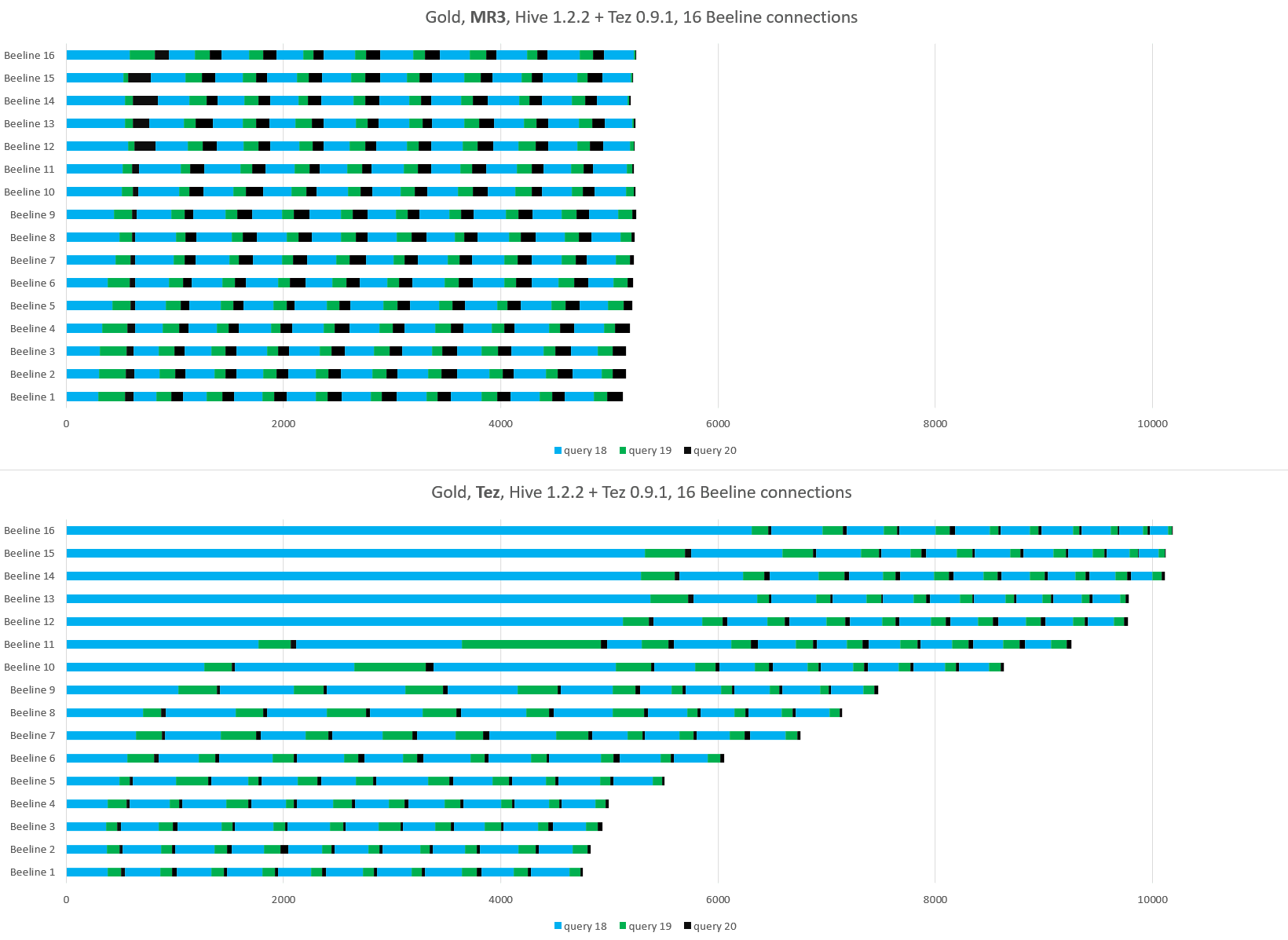 Result of repeating the same query

To further test Hive-MR3 and Hive-on-Tez, we run another experiment in which each of 16 Beeline connections repeats a total of 20 times the same query 18 from the TPC-DS benchmark. As in the previous experiment, we report the longest running time of all the Beeline connections.

The following chart shows the longest running time (in seconds) for each run in the Red cluster:

The following chart shows the longest running time (in seconds) for each run in the Gold cluster:

The following table shows the reduction in the longest running time (in percentage) when switching from Tez to MR3: